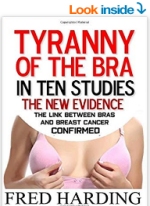 REVIEWS OF TYRANNY OF THE BRA 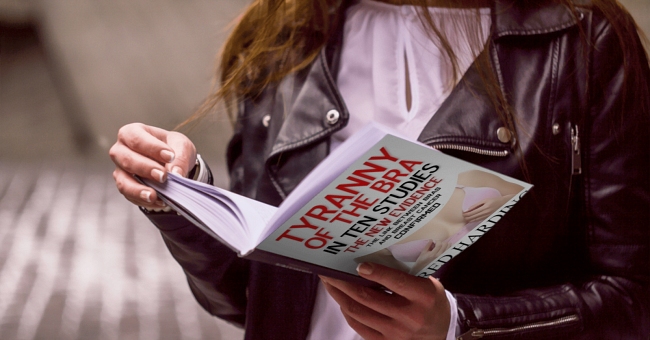 I LOVED THIS BOOK!

Historian Fred Harding has done a great job of providing an historical analysis that clearly shows how breast cancer is caused by the fashions of the times, specifically the wearing of breast-constrictive garments. For example, Harding shows that breast cancer is virtually unknown of in times when women wore loose clothing, as during ancient Egyptian and Roman times, while the disease was common in China for centuries when women were forced to bind their breasts. He also gives a compelling explanation of how breast cancer, which was so common among nuns that is was called Nuns Disease, was actually caused by breast binding garments worn by nuns to minimize their breasts and sexuality. Until now, the reason why nuns had had higher rates of breast cancer were unknown.

Harding was compelled to explore the history of the bra and other breast-constrictive garments in response to the loss of a 24/7 bra-using friend to breast cancer. Having read experts on the Internet saying that the bra-cancer link was a myth, Harding dug deeper into the controversy to discover numerous studies showing bras cause cancer, including my own in my book, Dressed to Kill: The Link Between Breast Cancer and Bras, first published in 1995 and updated with new research for 2018.

For 25 years my wife, Soma Grismaijer, who is my co-researcher and co-author, and I have been spreading the word about the health hazards of bras and how they cause breast pain, cysts, and cancer. When we first began our research, which started when Soma experienced a lump in her breast, we were shocked to see that the bra had been ignored in breast cancer research. Despite research showing that wearing tight bras is a health hazards and harms the breasts, tight clothing is ignored by modern medicine, as though it had no impact on anything. The fact is, however, that tight clothing impairs lymphatic circulation, which is essential for health. Tight clothing causes lymphedema, which causes reduced immunity and increases the incidence of disease, including cancer.

As Harding shows, doctors of the 18th Century knew that corsets caused breast cancer, just as doctors of the early 20th Century knew that bras and breast binding caused breast cancer. In the 1930s, lymphedema and stagnant lymphatic flow was known to cause cancer. And even today, after breast surgery, women are told not to wear anything tight, including tight bras, in order to prevent lymphedema from developing. But no mention is made of wearing tight bras before surgery, although the same issue applies.

As Harding explains, the bra is only part of the problem. The other part is the exposure we have to cancer-causing chemicals and radiation. These toxins become concentrated in the breasts if the lymphatic system is prevented from flushing them away, due to the wearing of a tight bra. Damage from radiation cannot be adequately repaired, and immune system attack on developing cancer cells cannot effectively happen, if the lymphatic are impaired by constriction.

Harding goes into the numerous studies done internationally that help prove that the tighter and longer you wear a bra the higher your risk for breast cancer rises. But what is most amazing is how this information is being suppressed by the American Cancer Society and those influenced by this authority. Harding gives an excellent expose of atrocious and harmful misinformation coming from the ACS, including how their board members, back in the 1950s, were on the board of Big Tobacco, resulting in the ACS resisting the tobacco-cancer link for decades. Harding debunks statements by the ACS that cancer was a disease of antiquity, and shows how cancer is a modern plague caused mostly by modern chemical exposure, something the ACS does not want to admit since they are controlled by the chemical industry.

I can attest to this problem with the ACS. When we first announced our research results back in 1994 to the ACS and other organizations, we were ignored. We decided to get a publisher to bring our results directly to the women who needed to hear it. Since then, the ACS has been our adversary, joined by Susan G. Komen, and even the NCI, which Harding shows is controlled by the ACS. All these organizations have statements online that say bras do not cause breast cancer and that there is no research support for the link. They also point to a study, paid for by the NCI which has been denying the link, that was performed at Fred Hutchinson Cancer Research Center in 2014 and was meant to be the last word on this controversy over bras causing cancer.

The study, as Harding and I and others have pointed out, was designed to disprove the link, and was seriously flawed. For example, they excluded bra-free women from the study, only looking at women over 55 who were bra users. This means there was no control group for comparison, like studying the tobacco-cancer link and excluding non-smokers for comparison. Also, they selected post-menopausal women only, so this may not apply to women under 55. Nevertheless, that one study, done by a PhD student, was hailed by the ACS and the media they control as the ultimate and final proof that bras are safe. Just come for regular mammograms to look for tumors as they appear.

Harding exposes this fraud, and shows studies done in 2015, 2016, and 2018 which show bras cause breast cancer and lymph stasis (impaired lymphatic flow) causes cancer. Yet, the ACS continues to deny any basis for the link, and refuses to address the issue.

When it comes to bucking the system and pointing out whats wrong, it takes committed and brave souls. Harding is one of those souls. He has pieced together the modern knowledge of the bra-cancer link and shown, in detail, how this problem is as old as breast-binding garments. He shows us that there is nothing really new about the bra-cancer link, since it was understood by doctors in the past. And he shows how the organizations and people we trust with our health are acting in bad faith and are blinding us from the real causes of cancer.

If we can learn from the past, and get past the self-serving, misinforming experts of the present, we can end this disease. Women deserve the right to know that their choice of underwear and how tightly to wear it is a life and death issue.